Iron deficiency – The nutrient most commonly missing in the diet of older people, women and children

According to the World Health Organization (WHO), iron deficiency is the most common nutrient deficiency in the world. Iron has many roles in the body, but one of its most important tasks is to transfer oxygen to the cells. It is important for the immune system and essential for many of the body´s metabolic functions. The production of enzymes (which play a vital role in the production of new cells, amino acids, hormones and neurotransmitters) depends on iron, as iron is a component in some of them. Iron is necessary for the growth and development of children’s and adolescents brains, it protects the body from effects of stress and is necessary for some neurotransmitters in the nervous system, such as dopamine.

Organ meats – a source of digestible iron
There are two types of iron, so-called heme iron and non-heme iron. Heme iron is derived from dark meat and other food of animal origin, while non-heme iron comes from plants, mostly cereals and dark vegetables. The heme iron is highly bioavailable and is better utilized (15-35%) than non-heme iron. Dietary factors have little effect on its absorption, whereas non-heme iron absorption is much lower (2%-20%) and strongly influenced by the presence of other food components.The best source of heme iron are; organ meats; blood, liver and hearts of animals. Certain food addiction, especially sugar-addiction, can be caused by iron deficiency.

Women of all ages usually get too little iron
Iron is the only nutrient that women need more than men. According to an Icelandic survey on diet and consumption patterns, the average consumption in young women is well below the recommended daily dose. Infants, children and fast growing adolescents also have increased need for iron in their diets. When the body doesn´t have enough of iron, deficiency occurs. Prolonged iron deficiency causes anemia and even though there are also other reasons for persons to develop anemia, iron deficiency is the most common one. Fatigue and energy failure are the most frequent symptoms of iron deficiency. Iron is a key cofactor in the making of neurotransmitters, chemicals in the brain that affect neuron signaling including serotonin, norepinephrine and especially dopamine. This may indicate connectivity to neurological problems, suggesting that iron deficiency can play a role in ADHD and learning difficulties in children.

Deficiency in the land of abundance
Iron deficiency can be caused by various reasons. Some medications may interfere with the body´s ability to absorb iron. These include  anti- inflammatory medications prescribed for rheumatoid arthritis, which can inhibit iron absorption from food and over time cause iron deficiency. Women of childbearing age, especially those with heavy menstruations, often suffer from iron deficiency, vegans and vegetarians, alcoholics, people with bleeding from the digestive track , blood donors, the elderly and others who eat undiversified foods may also lack iron.

It is best to get iron from your daily diet. If that is not sufficient, it´s easy to supplement with iron rich nutritional supplement made from real food such as the highly bioavailable desiccated lamb liver capsules – Pure Nutrition or Pure Liver as they contains heme-iron as well as all associated enzymes and excipients that facilitate absorption. In addition to the high amount of iron, each capsule also contains many other vitamins, minerals and trace minerals. The content is easily digested and iron intake in this natural form also prevents digestive discomfort, which often accompanies synthetic iron additives. 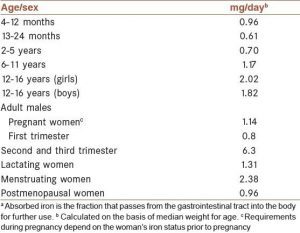 A table of the daily need of Iron