The last couple of weeks we, at Pure Natura, have been collecting chervil. It is for our new whole food supplement; Pure Harmony, which will be marketed in 2018. In this mix, we use two species of the plant, sweet cicely (sweet chervil) and wild chervil.
Chervil is a remarkable plant which can be used in many various ways, for example as a spice, herbal-tea or health supplement. According to folk medicine, chervils intake improves peoples spirit, sharpens their wits and it is said to have rejuvenating effects on older people.

The chervil, together with dill, parsley, fennel and carrots come from the Apiaceae family. It has many subspecies but we´ll discuss the two used in our blend; sweet cicely and wild chervil.

In Iceland the Sweet cicely is called Spanish chervil and its Spanish name is Myrrhis Odorata. “Myrrhis” comes from Greek and means “smell of myrrh” and “odorata” derived from the Latin word ‘odorus’ means fragrant. It has for centuries been used for cooking, as a flavoring in wine and for medicine. Its original home is central and southern Europe and it is a popular herb, grown in vegetable gardens near the kitchen, where it is easy to navigate.

The history of this plant is not well known, nor its association with ancient civilization, but it is known that the plant had some connection with the Virgin Mary and in pagan religion with good-natured Celtic summer goddesses.

The whole plant can be used as food, including the root. Early summer, the flowers, who are small, white and in abundance, are a welcome source of food for honeybees, butterflies and other insects, as well as other animals and birds thriving off them.

The plant is mild and carries the nickname “grandma’s candy”, since it was known to be safe for children to nibble on all summer long, in gardens where they were playing.

The leaves are sweet, with anise and a liquorice flavor, as well as a smell.  The flavor comes from an essential oil called anethole, which is in the syrup and is the same compound that is found in fennel and anise. The oil is soothing for the gastrointestinal tract and reduces inflammation.

The leaves taste sweet, as if sugar had been sprinkled over them and it comes as no surprise that the plant was popular in food during the times when there was no sugar available. Experiments are now being done, to use the sweet cicely as a substitute for sugar, like stevia, for those with blood sugar problems. The plant has a high nutritional value, like other known vegetables from the same genus, such as celery, carrots, coriander and fennel. It contains plant antioxidants, phenolic antioxidants such as zeaxanthin, lutein and criptoxanthin, vitamin A (beta carotene), vitamin C and vitamin E. In addition to that it contains large amount of B vitamins, who play a key role in metabolism of carbohydrates, fats and proteins by working as a coenzyme inside the body.

The dried leaves contain the following % of recommended daily dosage in 100 g:

In folk medicine the Sweet cicely has a long history. During the plague in earlier centuries the plant was, in combination with the plant Angelica (which we also use in some of Pure Natura’s products), used to ward off and prevent infections. Apart from that, it has mostly been used to increase appetite, improve digestion, reduce gastrointestinal gas production and intestinal cramps, for cough and to strengthen the lungs. Its consumption was also considered to lift peoples spirits and banish gloomy thoughts.

The wild chervil (Anthriscus sylvestris) is the less popular and less used type of chervil. It is a “newcomer” in Iceland, but is native to Europe, Asia and Africa. In neighboring countries, it has various names such as Cow-parsley, Devil´s Parsley and Queen Anne´s Lace. The wild chervil has not been studied as much as its cousin the Sweet chervil, but shares many similar qualities.

In the discussion about the wild chervil growing in Iceland, little information has been given on the positive or useful value of this plant, which is probably the reason why it was initially transported to the country and planted in vegetable gardens. The main beneficial features are quite comprehensive and the same as the sweet chervil’s features.

In the past, the plant was considered a miraculous herb, representing immortality, regeneration and new life.
The plant is said to have mild diuretic effects and release the body of sand and stones from the gallbladder and kidneys, have good effects on gout, blood pressure, the cardiovascular system and cholesterol formation. Also, it should be good for the digestion, strengthens lungs, eyes and eyesight and calms the nervous system and generally stimulates the body’s healing power. On top of that it is said to have antiseptic and antioxidant properties.

The wild chervil contains a large amount of bioflavonoids, who assist the body in various ways e.g. vitamin C absorption. The plant is also rich in various nutrients for growth and maintenance.
Studies have also shown that the plant contains compounds that have strengthening effects on the immune system.

NB. It is not advisable to use the herb during pregnancy as its intake may potentially cause a contraction in the uterus.

At Pure Natura we use the seeds and leaves of the chervils in our new product, Pure Harmony. They were chosen because of their multifunctional, broad-spectrum of positive and harmonizing impact on the body. 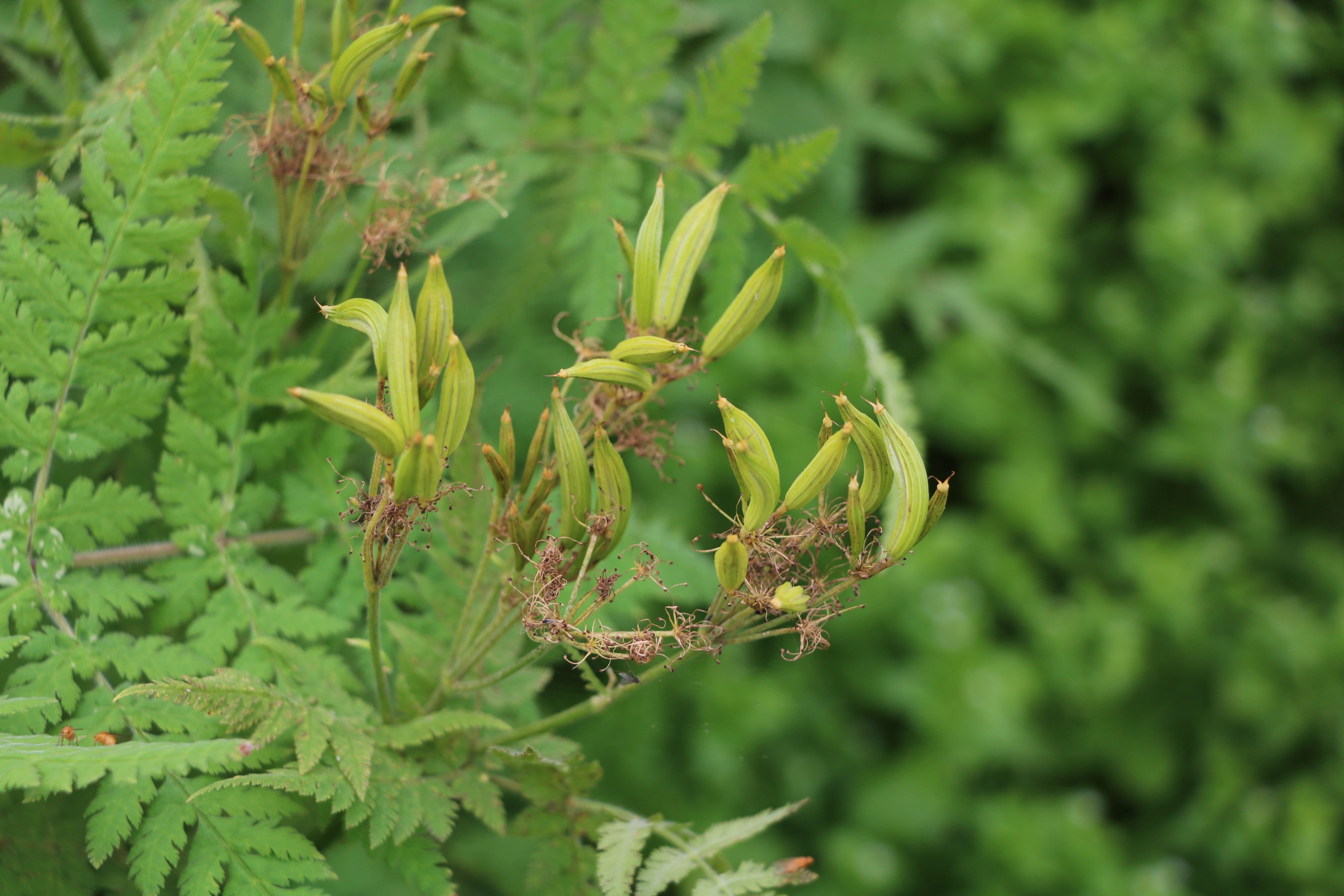