Astaxanthin – the most powerful natural antioxidant

Natural Astaxanthin is found in various microorganisms such as algae and in marine animals; shrimp, lobster, salmon and more. Mammals are not capable of producing astaxanthin but can obtain it by eating the animals containing it and the algae that produce it. Astaxanthin is a fat-soluble pigment, dark red in color and belongs to a group of chemicals called carotenoids.
It gives red and pink color to the shell of the shrimp and lobster, the tissues of wild salmon, sea trout and the flamingo birds.
It was in the 18th century that the algae Haematoccus pluvialis was discovered, though it wasn´t until the middle of the 20th century that the Astaxanthin that he produces was detected. In recent years, extensive research into its potential health benefits have been conducted and people have realized how powerful an antioxidant Astaxanthin really is. Every year around 100 new studies are done and by now approximately 1000 have already been published.

Astaxanthin is produced by the algae when they experience difficult environmental condition and stress. That can be due to a combination of things such a lack of food, absence of water, intense sunlight and change in temperature. As a result of the stress, the algae ´s cells have hyper accumulated the red pigment Astaxanthin, which serves as a “force-field” to protect them.
But what does it mean to us if a chemical is an antioxidant and what are the health benefits of consuming it?
The short version of this answer is that Astaxanthin protects the body from aging and wear and tear.
Antioxidants fight against oxidation and oxidative stress caused by free radicals, which over time lead to cell degradation and tissue damage. Consumption of Astaxanthin reduces oxidation and helps to repair damages. It affects different organs and organ systems such as skin, tendons, eyes, nervous- and cardiovascular systems and is a broad acting super powerful antioxidant.

There are two types of Astaxanthin; the natural form that is found in wild fish and algae and synthetic form made from petrochemicals. The natural Astaxanthin is much more powerful than the synthetic one, which only has ca. one-third of the antioxidant capacity of natural Astaxanthin. At Pure Natura, we of course use the freshwater algae Haematococcus Pluvialis. In addition to the Astaxanthin, the algae also contains a lot of omega-3 fatty acids. The algae is grown sustainably in Iceland and cultured using Iceland´s clean air, water and renewable power.

Due of its properties, Astaxanthin has been claimed to be the perfect nutrient to keep the aging process at bay and the athlete’s secret weapon.
We were fully aware of this when we selected it as one of the ingredients in our male supplement “Pure Natura Men”. It was never the intention to create anything but an outstanding blend for our guys. We are pursuing the antioxidant activity of the chemical and its positive effects on the whole body ie. immune- & cardiovascular system, joints, tendons, muscles, skin, brain and nerves, eyes and more. And the anti-inflammatory activity, good effects on the metabolism of sugar, digestive tract, breathing and fertility.
As the ultimate antioxidant and the king of the Carotenoids Astaxanthin surely has its role to play in “Pure Natura Men”. 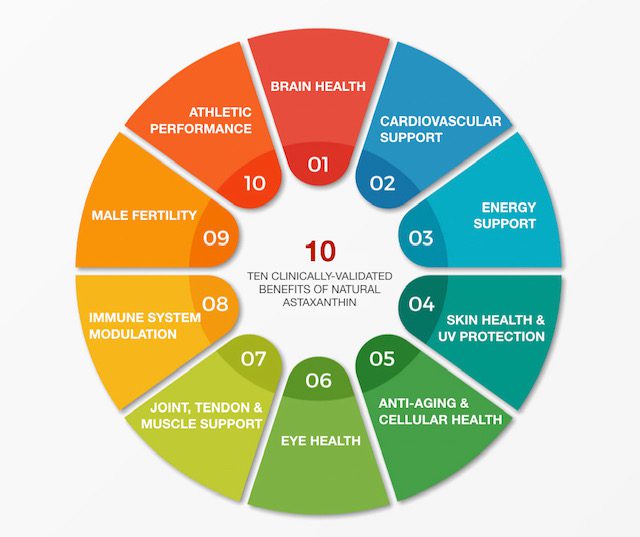